...is the slogan for travelers on Highway 129 in Tennessee, also known as TAIL OF THE DRAGON. So I did.
I first learned about Highway 129 from reading the back of a stranger's T-shirt in Dry Tortugas, FL! Suddenly...it became a road I wanted to explore -- in a car. I understand Mini Coopers from all over the country come here by the hundreds for an annual road rally, but Highway 129 belongs to bikers year round. Driving Tail of the Dragon requires one to negotiate 318 curves in ELEVEN miles! If you drive it forth and then back, you get 22 hair-raising miles and 636 thrilling curves! It starts and ends at an intersection called Deal's Gap in North Carolina; a few tenths of a mile later, it enters SE Tennessee. 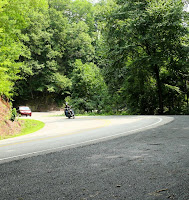 This guy is one of a trio who stakes out a curve for the day, shoots away with a long, fast lens then sells his photos on line. Kind of like the guys who perch on riverside rocks and take photos of people in yellow rafts almost drowning in white water!

Pausing at the Kool Aid stand at the top to chat, check out the view, admire the wheels, maybe leave a reminder you passed by - every year you passed by - trade horror stories, polish the chrome AGAIN, then strap up and move on, strangers no more.

And here I thought Lazy Dazers were freaks about keeping their rigs spotless! 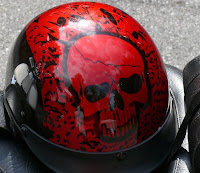 Bikers seem to cross cultural, age and gender lines. To me they seem a bit cultish with a special dare-devil gene! There seem to be as many gray-haired grandparents as there are hotshots barely out of their teens. They travel solo, in pairs, in clubby groups on stripped-down racing bikes, touring bikes with saddlebags and some pulling a matching trailer containing camping gear.

Yes, I had permission to photograph her!

The bike of choice still seems to be a "Hog;" they come from all over the world and congregate at "Motorcycle Resorts." Well, why not? Deal's Gap has a campground, motel rooms, cafe, a retail store that sells all things motorcycle, and pint-size parking spaces!

The TREE OF SHAME! It would be funny if it didn't represent such unfortunate occasions. OK, I chuckled; it's funny!

I mounted my intrepid, spunky zoom-zoom Ford Focus........WHHEEEEEEEE! Buckle up, grab the chicken handle and shut up!
1 comment:

Foxfire is an odd bluish-green, almost neon-like glow that can sometimes be glimpsed in forests on dark nights. It is a bioluminescent fungi usually found on decaying logs and bark. It is also the name given to an innovative classroom project started a little over 40 years ago that today continues to illuminate a unique path to knowledge for high school students in Raybun County in the northeast mountains of Georgia.
In an effort to get his students involved in learning English, an inspired Rabun Gap-Nacoochee School teacher asked his class what sort of project would appeal to them. The students chose to produce a magazine. They started by collecting stories about and conducting interviews of family and community elders about the vanishing way of life in this rural Southern Appalachian community. Today, one finds a huge library of collected articles, preserved in magazine format, cookbooks and anthologies, written and edited by the students that include personality profiles, stories about mountain lore and traditions and how-to articles about traditional crafts and skills, such as how to make apple butter, a banjo and moonshine! Forty years' worth of recorded history, photographs, documents and artifacts have been permanently preserved.
Follow me up the road to Foxfire Museum & Heritage Center. The property for the center was purchased with book royalties in 1974 when the first of over 20 Appalachian cabins and other structures were moved, reassembled and restored on the property, mostly by students in the Foxfire program. 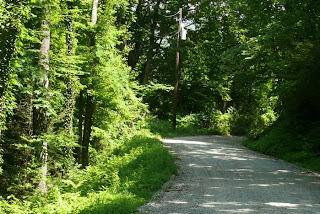 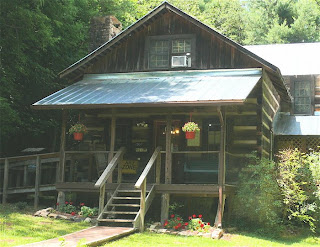 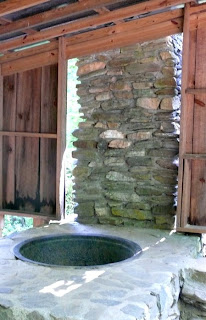 Foxfire believes the late-1700's hand built wagon on the left is one of the last remaining wagons to have traversed the Cherokee "Trail of Tears" from their homelands to Oklahoma. The wagon on the right was built by Judd Nelson, one of the last remaining blacksmiths who knew how to build wagons from beginning to end. Foxfire commissioned the wagon in 1983 so students could document the process in its entirety. 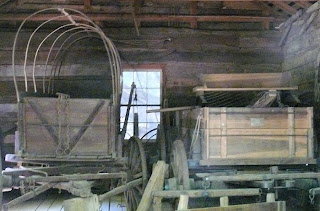 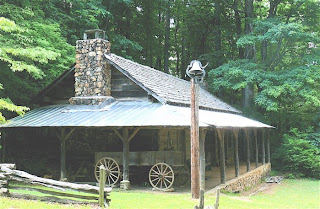 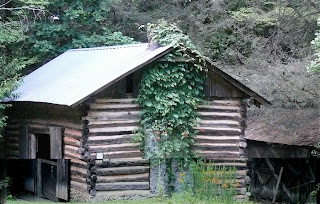 This grist mill was moved to the Foxfire grounds from North Carolina and restored to its original working condition. And it does work. 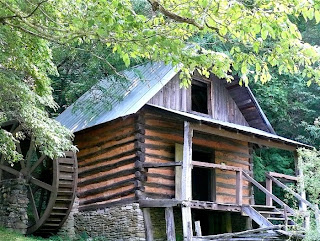 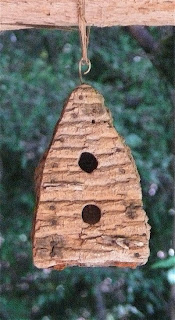 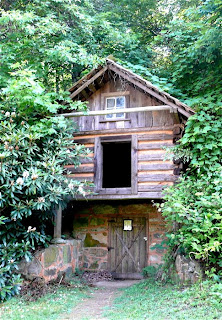 Foxfire Museum is not static. Carnesville House built in the 1850's, for example, houses the Foxfire Archive where the meticulous student work product is maintained (and not open to the public). 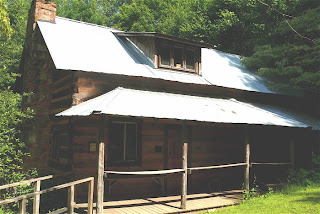 A student-built copy of a hands-free shaving horse (vise), still used today to grip a piece of wood so the operator can use both hands to work his piece, be it a spindle, a table leg, a railing, a shingle, etc. 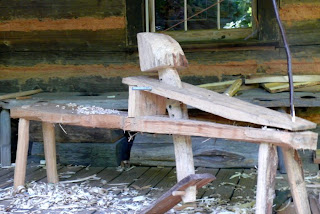 This "Dog-Trot" cabin housed three family generations with 10 children each. The dog-trot design consists of two cabins connected by a breezeway that was a blessing in the summer, for it provided ventilation and shade during hot spells. The concept also allowed a family to add on to a basic single structure at its leisure, as the family grew and when it could afford to do so. 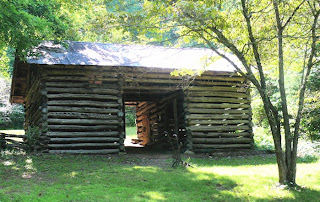 A well-equipped tool shed that houses the simple traditional tools actually used in restoring and maintaining the museum's buildings. 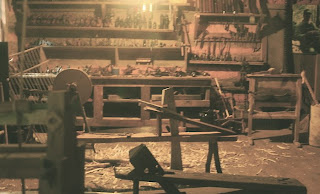 The split rail fences throughout the Museum were constructed by students. 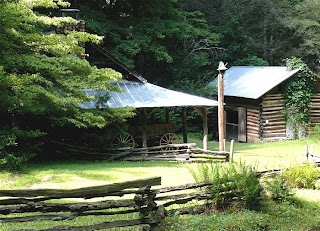 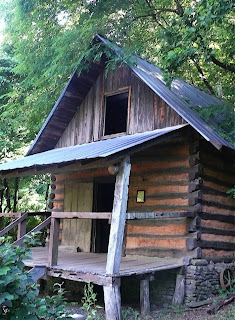 This historian is tutoring visitors on the use of a GEE-HAW Whimsie Doodle Stick, sometimes also called a GEE-HAW Whammy Diddle Stick, an Appalachian folk toy that illustrates the strategy behind the calls for animals (dogs, mules) to turn right (GEE!) or left (HAW!). Depending on which way the second stick grazes the notched stick, the little windmill/propeller on the end will turn right or left. It takes lots of practice -- trust me! 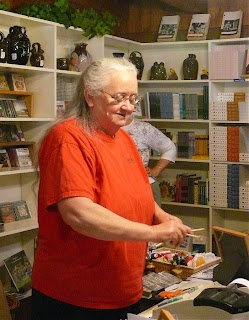 Appalachian Folk Art is whimsical (and a bit bizarre). And definitely unique! 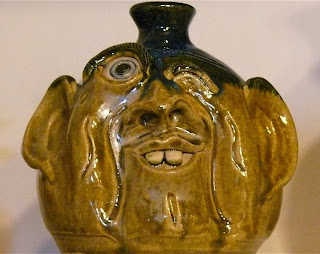 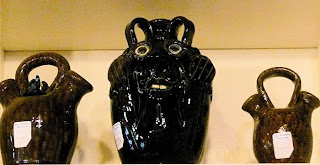 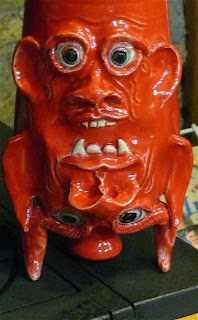 And some just plain beautiful. 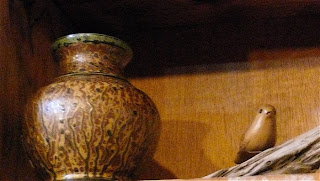 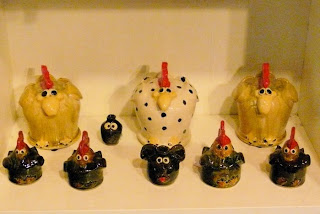 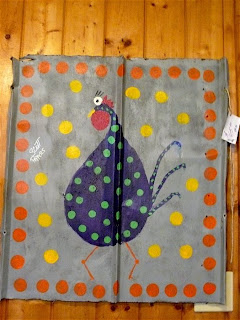 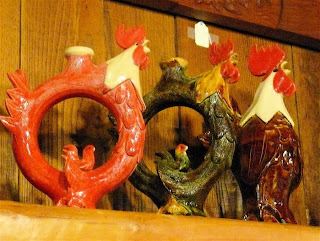 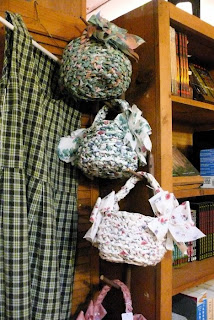