Flying in and out of the Miami Airport had hitherto been my only Florida experience.  I have spent countless vacations snorkeling all over the Bahamas, Hawaii and both coasts of Mexico.  So it's no surprise that my primary goal while visiting Florida was to swim in the Florida Keys National Marine Sanctuary, the location of the world's third largest coral reef.  Not only does the warm, undulating ocean water soothe me and take me to nether regions not accessible when my feet are firmly planted on the ground, but swaying and bobbing in a vibrantly colored underwater garden with a kaleidoscope of brilliant little jewels flitting around me, is one of my most cherished pursuits. When I enter this submerged, tranquil, magical kingdom it is with great anticipation that awakens in me an even greater appreciation of the world that surrounds us.
~~~~~~~~~~
Some cap'ns and dive masters are more fun than others. These guys on the John Pennecamp Coral Reef State Park's, "Encounter" were my faves:  Rick and Robert.

Snorkeling Florida's reef requires a boat to reach it, and most accessible sections are at least five miles, and a 45-60 minute boat ride, from the parks.  I had allotted the entire month of May to explore this very interesting state and ended up spending more than two weeks in the Keys.  Who knows when I'd be able to return to this unique underwater wonderland.

An assortment of mooring buoys have been sunk in sand here and there along the reef (that extends from Miami to Dry Tortugas) to facilitate anchorage of dive boats. Boats aren't REQUIRED to use the buoys, but if they don't there are strict guidelines they must follow: they MUST anchor in sand so that the anchor, chain and line does not come in contact with the coral or sea grass beds.  We were constantly admonished not to stand up or touch the coral.  The reef is passionately protected, and even the lightest touch by hands or equipment kills sensitive polyps.  In this picture the light colored ocean has a sandy bottom, the dark areas are sea grass meadows.  The reef is not visible in this photo.

Photographic notes:  Those photos taken underwater were taken with a very chintzy $12.00 instamatic-style re-usable camera in a leak-proof housing.  I tried both 400 and 800 ASA Kodak film (made no difference), fiddled with most of the photos to adjust the prevalent bluish tint, and cropped almost all of them. They still came out grainy, fuzzy or out of focus.  And you certainly won't see any detail at all unless you click on the photos to enlarge them. Absolutely none of these photos come anywhere near accurately representing life on this marvelous reef; they simply reflect another joyful experience in Florida!
Don't walk on the deck in your fins; sit on the steps to put them on. The water's warm and inviting; the pool's open; JUMP IN!

Schooling Silversides -- more like a silver blizzard than a "school"! 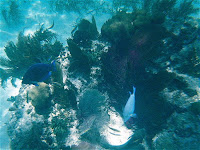 Most of the fish were familiar to me because they are indigenous to other warm-water tropical regions. But here in Florida, for the first time, I spotted bright orange sponges and a ribbon-like green eel slithering back to its hiding place, swam with several different varieties of Sharks, an enormous Goliath Grouper and sleek silver Barracuda. Every trip to a different part of the reef, was to visit a fresh coral garden richly alive with delicate corals I'd never seen before, in water unimaginably clear. 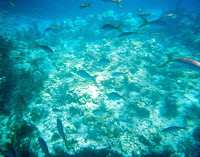 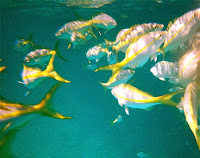 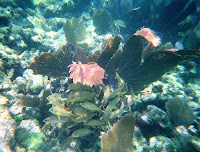 There are colonies of hard corals that look like rocks, such as brain, finger and staghorn coral and the rare pillar coral; and soft corals and Gorgonians, that look like feathers, plumes and fans, that sway with the current.  So many soft corals resemble plants, it's hard to believe they are living animals. 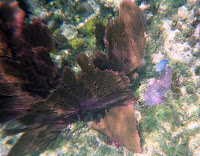 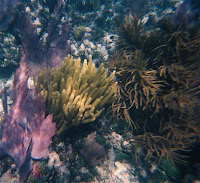 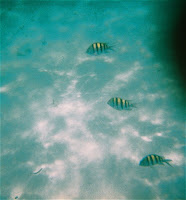 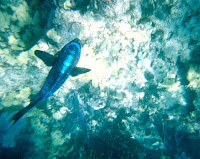 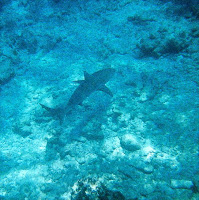 ...where one can view details of the coral polyps up close, without color distortion, because they were taken with a REAL camera!