How best to describe Key West?  Well, for starters: forty, party-animal years ago, it would have been my kind of place!  Yes indeed.  As I approach my seventies though, it was not super high on my list of places to visit, but curiosity got the best of me, and I found it to be a lighthearted, energetic, amusing diversion.  And decadent!  Key West's Duvall Street may outshine the infamous hedonism found on Bourbon Street!

Playful sculptures at the entrance to the town's playhouse/theater.

~~~~~~~~~~
In Hemingway's day, most Key West homes were small, quaint cottages, surrounded by tropical trees and plants.  It definitely has a Cuban-Bahamanian feel. Well, DUH!  Key West is as far South as you can go in the Continental US, and it's actually closer to Cuba than it is to Miami.  Because so many of its locals hail from Cuba and the Bahamas, it exudes a distinctive "island" pizzazz and is lovingly referred to as "The Conch Republic." 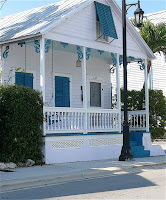 Hemingway slept here.  Missed the tour; this was the best I could do! 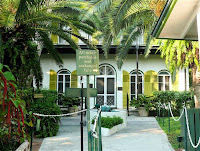 ~~~~~~~~~~
Although I didn't count, I can assure you Key West has waaaaay more bars than churches.  In one block alone on Duval Street, I counted four on each side of the street; and I'm sure I missed a few as I drove by!  Let's take a 360-degree stroll around this establishment called Bo's, that is enjoying a revision of its former life as a cigar factory.

Many bars are open to the street, perfect for people watching, and some like this one are intimately squeezed between two other establishments.

There didn't seem to be an ordinance limiting "open" containers on the street, or else gendarmes simply looked the other way, but I didn't see any of them either.  At all.  Ever!  These "kids" kept urging me to cross the street for a "happy hour" special (it was two in the afternoon!):  Three kinds of rum, a splash of pineapple juice, $6.00, and you can keep the "glass."  Lordy, Lordy, those were the days! 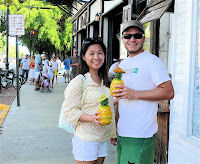 Adjacent to Mallory Square, this meeting place had absolutely no sitting or standing room left as time for the sunset festivities approached.  It never ceases to amaze me how waitresses can glide through crowds and deliver the right drinks to the right table without spilling a drop.  I would be a flaming disaster no matter how much I practiced.  They deserve BIG tips.

If there are any Lazy Daze Ladeze who attended our September, 2008 outing reading this, you may recall a different kind of Flying Monkey.  Do I see smiles?

~~~~~~~~~~
These competing "message cars" were parked across the aisle in the same parking lot. One of them is more message-ier than the other!

There was so much other distracting stuff to amuse me I guess, that I didn't notice the plant on the hitch until I uploaded this photo to my computer!

~~~~~~~~~~
The streets in old town Key West are little more than glorified alleyways.  Parking lots are scarce (the going rate is $4.00/hr.); metered street parking is prevalent, sometimes on both sides of the street, leaving barely enough room for a car and bicycle to pass one another.  And, for some reason, only a few streets are one-way. 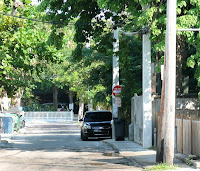 So how do Key Westers get around town?  Let me show you the ways. 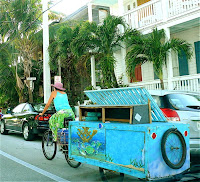 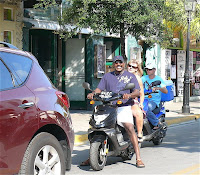 In the Everglades, alligators refer to these as "meals on wheels"! 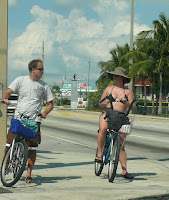 ~~~~~~~~~~
Ubiquitous "free range" chickens consider Key West a prime roost.  Little chicken families are everywhere.  The town takes pride in their chickens; don't mess with the chickens!  They actually range and roam and strut all over the place, and somehow instinctively know how to steer clear of traffic and stay safely out of harm's way. 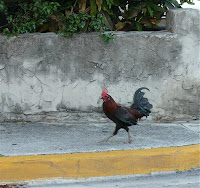 ~~~~~~~~~~
The sunset celebration in Mallory Square was touted "not-to-be-missed" in every tourist brochure I picked up.  So Mallory Square, here I come! 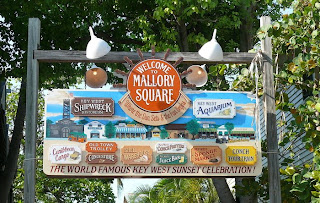 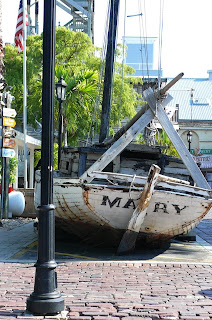 ~~~~~~~~~~
A Cuban enclave, selling Cuban cigars and trinkets made in China, included a Mallory Square restaurant, Salsa band and Cuban food.  The menu included this little fine-print caveat, squirreled away below the Dessert listing:  "for your convenience, an 18% gratuity will be added to your bill."  This better be good by gawd!!  (The food was mediocre, but the music and dancing entertainment made it worthwhile.) 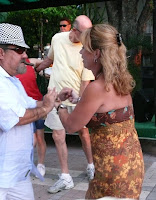 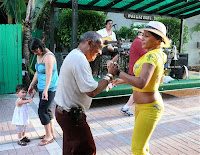 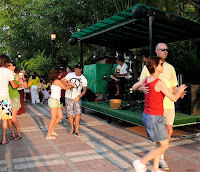 I was a little slow on the trigger here, but that tumbling guy in red had made a running start to summersault through the hoop, delighting a huge audience and fleecing us of appreciative dinero!

This local troupe just dresses up in Halloween costumes and charges you for the privilege of taking their picture. 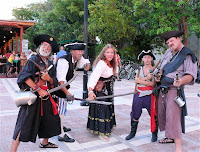 This act featured Millie the Wonder Dog.  First she would make the rounds around the circle to collect bills (as in folding money) from outstretched hands, then she would deposit them in the little red bucket. Hey!  She got lots of  treats and pets in return and then plenty of breathless oooh's and aaah's and applause as she maneuvered the ladder and tightrope.  She deserved every single handout.  (I'm guessing she had to share some with her human though.) 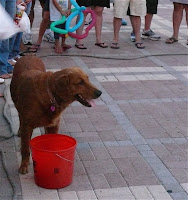 Lots of ticky tacky stuff to buy, but there were plenty of buyers....the cruise ship was in port!! 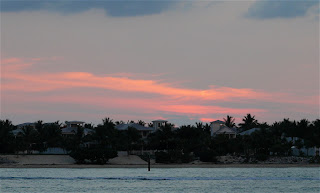 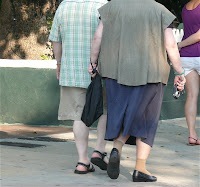