When day is done, leftovers are wrapped, the kitchen is spruced, and the water stops running, the birds, Beezer and Squeeky, know it's their time for some quality interaction with their "mates," Joe and Janet.  This is Squeeky in Janet's lap chowing down on her special out-of-her-cage, after-dinner treat. 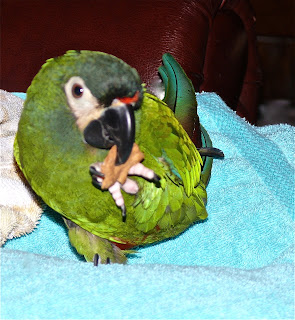 Janet was originally Beezer's "mate," but after that traitor went and introduced Squeeky to the household, and Beezer was no longer an only-parrot, he stopped singing and talking, snubbed Janet and defected.  Joe became Beezer's new "mate."  Sometimes Joe is a little late to hit his chair so Beezer will deign to *temporarily* perch on Janet's old familiar shoulder.  But only for a few minutes! 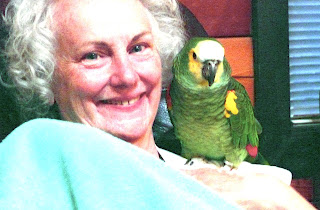 Beezer's special after-dinner, out-of-his-cage treat is the opportunity to groom Joe's nails!  Or maybe his beard.  If you click to enlarge this photo, you can admire Beezer's Mabeline lashes. 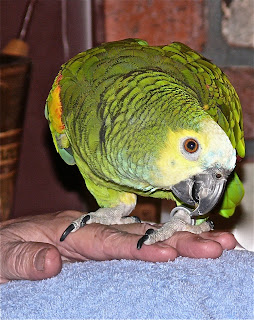