To this Left Coast woman, "delta" connotes the mouth of a river or the confluence and terminus of several rivers.  So, I was a little confused about why the region more or less in the "middle" of the Mississippi River was referred to as The Delta.  I soon learned that in this part of the country, distinction is made between "The Mississippi Delta" and "The Mississippi RIVER Delta"!  The River Delta is the mouth of the river, where it meets the Gulf of Mexico.
The MISSISSIPPI Delta is as much defined by culture as geology. Geologically, The Delta is a vast, agriculturally fertile alluvial plain where sugar, soy beans, corn, cotton are grown. Culturally, blues music style and tradition has its roots in The Delta region.
~~~~~~~~~~
THE SUNFLOWER RIVER RUNS THROUGH IT

~~~~~~~~~~
LANDMARKS & CELEBRITIES
Clarksdale was the boyhood home of Tennessee Williams, whose grandfather served as a rector of St. Georges Episcopal Church; Williams lived with his grandparents in this parsonage next door.

The church is in the middle of a historic neighborhood that is said to have influenced characters and events in Williams' plays.  The town celebrates an annual Williams
Festival that includes a literary conference, a Williams play, film screenings and a drama competition for high school students.
The Belle-Clark Mansion, on Clark Street was built by the town's founder John Clark. Clark's daughter, Blanche was one of Williams' playmates and is said to have inspired the Character Blanche DuBois in a "Streetcar Named Desire." 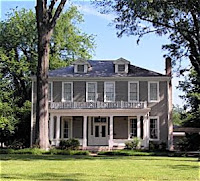 And......on the other side of the tracks, Ike Turner was born and raised here.

~~~~~~~~~~
DOWNTOWN
This is either a pretty seedy dive or an experiment for a vertical gardening technique! 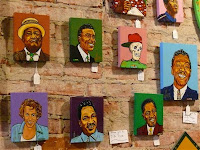 And this one was created by a Parchman Farm (Prison) inmate. 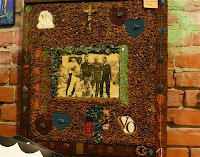 ~~~~~~~~~~
MONKEYS ON DOGS!
Three herding dogs, two charismatic monkeys, one rodeo-clown trainer, a bunch of wooly beasties, a happy, laughing appreciative crowd!   The woolies were herded into their gated community in little more than 5 minutes -- waaay too efficient!  Whine! 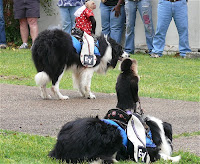 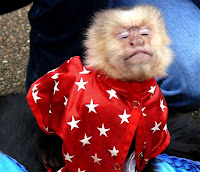