"Q" IS FOR QUOTIDIAN

While I enjoy a lazy catch up in Santa Cruz, my blog has taken a seat on the back burner. Whipping myself into action while organizing photos and research from last year's trip, I decided to try a daily (QUOTIDIAN) post of odds and ends, this and that and good-bad-ugly photos to entertain you. OK, to entertain MYSELF! And keep me off the streets and out of trouble.
These mundane, silly, QUOTIDIAN posts will be prefaced by the letter "Q" so you, dear gentle reader, will know the post is just a QUOTIDIAN dose of folly!
~~~~~~~~~~
We begin with a tatterer. First of all, you won't find the word tatterer in the dictionary -- at least not in mine. And "tatters" is not plural for people who tat. ( Tatters refers to something torn or shredded.) So I couldn't refer to people who tat as tatters. Tat is the verb form of the noun tatting. She tats; she is tatting today; she tatted yesterday. Tatting is the process of making tats. Tats are a form of knotted lace-like knots -- knot called knotting, but tatting!
I ran into Tom, an adorable male tatterer at Museum of Appalachia's Tennessee Homecoming last Fall. Tom has big lumpy, hunky globs for fingers, but those hunky, globby fingers are frighteningly fleet! Meet Tom the tatterer! Watching his fingers and shuttle fly through the thread was a hoot. First, because I had never seen a tatting man, and second because he was definitely NOT half fast at it! 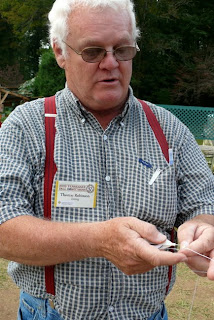 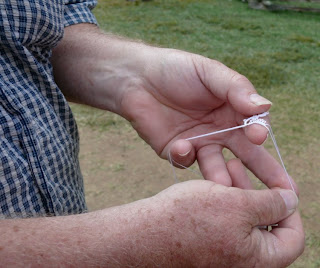 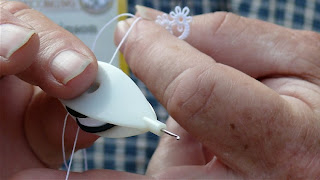 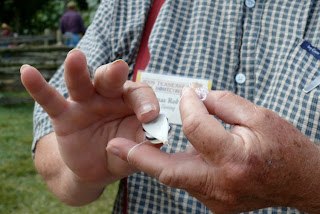 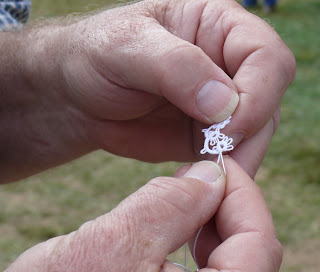