NOT JUST *ANY* CULT! 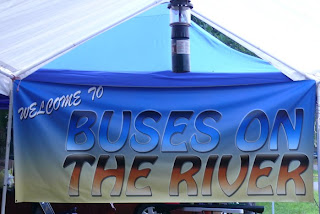 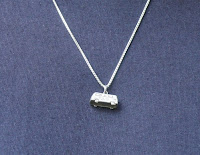 This gathering of aging hippies, hippies-in-waiting, nurses, judges, teachers, mechanics, engineers, homemakers on Tennessee's Nolichucky River -- 80 buses in all -- welcomed this outsider, perhaps because before she joined the Lazy Daze Cult, she was a member of the VW Bus Cult and could recount a few nostalgic stories of her own. Like in 1967 when my ex and I, in our salad days, drove our 1963 Mergatroyd VW "splitty" van conversion across the country from California to New Jersey (and back), similar to my current voyage in a Lazy Daze motorhome.
Ours was what's called a "splitty" because it had a two-window (split) windshield like this one. It started out as a bare-bones VW panel "truck" with a metal floor, no windows, insulation or pop top -- air cooled and slow as molasses.

We cut out and framed windows, installed paneling and added curtains, a pull out bed, exactly like the one I use now in my Lazy Daze, and an upright Coleman fridge snugged into its own cabinet.

On the side doors, Mergatroyd had fold-down counters just large enough to support a Coleman white-gas stove that you had to pump to prime.

It's amazing how little we needed in those days. And from the looks of it today, not that much has changed: peace signs, hula-hoops, tie-dye, Spam and compact, streamlined quarters. These folks invited me to wander among them, peek inside their little nests, let me happily relive the "olden days" and take gobs of pictures.

This is the "patriarch"; he coordinates this annual gathering that draws VW Bus owners from all over the Southeast.

His castle walls are made of cut up chunks of foam rubber "stones" cemented to the bus body and painted. Note the lanterns and "strained glass" windows!!! He owns three VW buses; his son uses this one. 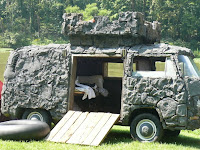 This beautifully restored Bus is his primary ride. This is what it looked like on Thursday evening...

Then later, settled in, with a place for everything, everything in its place.

In many cases the bus was used as transport, and tents and add-on "Florida rooms" were used for sleeping.

Yes, tie-dye is still very much "in"! 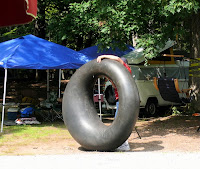 My Mom painted that window! See the Bug in the corner?

Coffee and a Mimosa -- what every birthday girl needs the morning after!

Not trying too hard to find homes for the new borns. Yes, of course I was tempted!

And the princess has her very own suite, thank you. 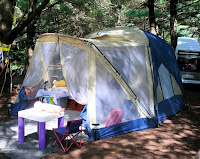 The pot luck feast Saturday featured a "Spam Cook Off" -- some of it actually creative and tasty. (The Spam ice cream, however, no matter how hard its maker tried to disguise it in maple sugar, was disgusting!!) 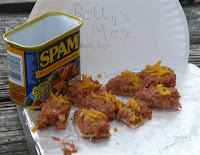 And prizes also awaited the best Spam-mobile sculpture using a Spam can. 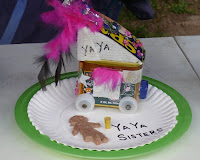 It was a lighthearted weekend that dispelled once and for all the myth that cults can't embrace complete "outsiders" in their midst! 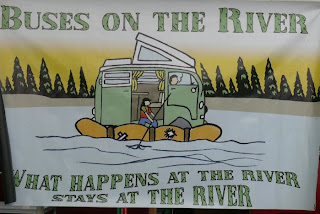