I "HEART" NEW ORLEANS, Warts and All!

Many people warned me about how down-at-the-heels she's become, about the crime and grime, about the ill effects of Katrina.  But New Orleans is a city after all.  Of course there are grungy, bad neighborhoods; of course one shouldn't take risks; of course one doesn't buy hats from aggressive Hare Krishnas!  However, not once did I ever feel intimidated or threatened, and I was in the French Quarter every night!
Street food, street artists, mule-drawn carriages, flowers, beignets (yummy but really just a fancy French name for sopaipillas with powdered sugar rather than honey!!), unique architecture, music, mimes, fountains, cafes and murals tucked away in alleys ...let's take a stroll around this fabulous, vibrant American treasure.
~~~~~~~~~~

The old JAX Brewery has been converted to a New Orleans version of a shopping mall.

~~~~~~~~~~
Cafe du Monde -- very strange evolution since my first visit in the 50's:  A waitperson takes your order (beignets and choice of beverage).  He/She returns to the "kitchen" to put it together, then stands in line at the one and only cash register and prepays for whatever you ordered.  He/she then delivers the order to you and collects and pockets the tab and tip.  Independent contractors, not employees?  Some person's idea of improving efficiency or cutting costs and overhead? Someone is constantly sweeping the floors in an effort to keep up with the powdered sugar that's on every single surface; there doesn't seem to be an ant problem!  Another curiosity: each order came with a glass of water containing spoons, and I never did figure out the purpose of the water and spoons!

~~~~~~~~~
The infamous Bourbon Street.  Even though the red lantern "salons" of ill repute have been swept away, today Bourbon Street is still earning its decadent, rowdy, bawdy, noisy and FUN reputation.

The silver man.  You want a picture?...you pay!

~~~~~~~~~~
I was twelve when I first visited New Orleans, and I had to see if this establishment had survived the few decades since then.  Indeed Pat O'Brien's is a thriving touristy joint with several inside bars and courtyards and alleyways to sip (one MUST sip) one of their Hurricanes:  rum with some other heady, secret stuff.  Oh my!

Yes, that reddish glowing stuff in the water is fire.  Fire water??!!! 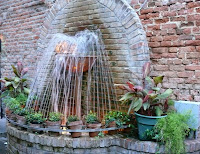 OK, I admit:  I did indeed just fall off the turnip truck!  This contraption does exactly as it says if you press the green button (if you can't read the instructions, click on the photo to enlarge it).  I will also admit to several wasteful presses of that green button. Simple pleasures!  Fascinating!!!  The used cover simply vanished.  I definitely need to revisit New Orleans to find out where they went!

These two darlings, celebrating an anniversary, kindly let me photograph their Hurricanes.

~~~~~~~~~~
New Orleans' City Park (thank God they don't call it Verizon Park or something equally stooopid!), is 150 years old and located in the heart of the city.  Katrina damage included the loss of over a thousand trees that were toppled or drowned in salt water; some oaks were more than 600 years old.  The park is slowly recovering and still has something for everyone: a golf course, art museum, an amusement park, two stadiums, lagoons and lakes, to name just a few of its attractions.  For me, the Botanical Gardens was the main draw.
I found several of these perfect examples of symbiosis:  sword ferns growing in a palm tree host, both lush and healthy!

When was the last time you saw a maypole?  There were three on the garden grounds, just waiting for some magical druids to flit and frolic amongst the ribbons.

~~~~~~~~~~
I had to winnow hundreds of pictures of distinctive buildings, balconies, delicate, lacy grillwork down to just a few so you wouldn't fall asleep!  Some of the grillwork is cast iron, some is wrought iron; and I regret not taking closeups.  It's intricate and beautiful. 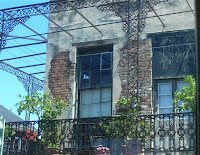 No, not Disneyland; this is St. Louis Cathedral in Jackson Square with its statue of... why Andrew Jackson of course!

~~~~~~~~~~
Little splashes and patches of color and whimsey are everywhere in the French Quarter, just adding more zest and character to an already-bewitching city.

The "keyboard" is paper.  Glad it didn't rain!

The locals refer to this one as Joanie on a Pony!

This concludes Part I!  Having spent three jam-packed days here, I hardly knew where to begin.  Well, the simple solution is to do New Orleans in segments so you don't get bored with too many "family vacation slides"!
No comments:

ALONG THE TECHE...
...in New Iberia, Jeanerette, Morgan City, sugar cane plantations, rice fields, tourism, heavy duty marine and petroleum industries, restored historical districts, rich and poor and people living simply.  The Teche meanders 120 muddy miles through three parishes and termniates where it joins some lakes which then empty into the Port of Morgan City. 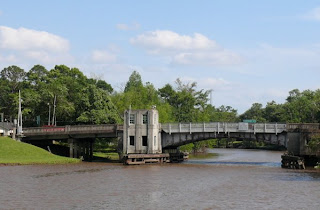 Yeah-yeah, they're just rusty old gears, but they reminded me of sun bursts. OK...rusty, burnt sunbursts.  Eye of the beholder you know!

Rice cakes are still made at the Konrico Rice Mill.

A sugar cane plantation home -- could have been transported from Hawaii.

~~~~~~~~~~
NEW IBERIA...
...the Queen City of the Teche, and the domain of Dave Robicheaux, the imaginary Cajun sheriff of New Iberia Parish, whose creator is the local and legendary prize-winning author, James Lee Burke.  New Iberia is a place where "people never meet a stranger."  Downtown is a historic district and nestled amongst moss-draped live oaks, scores of  homes along the Teche are on the National Register of Historic Places.  One can take a walking tour of "Dave's Domain" and maybe even run into his originator at Victor's Cafeteria, his favorite eatery.  I was not so lucky that day, but I got the T-Shirt!

And occupants of this humble abode...

look at this one across the street!

~~~~~~~~~~
MAMOU...
...made famous by Fred's Lounge, a major Cajun music hot spot where you are admonished not to dance on the cigarette machines.  Take yourself to Fred's this coming Saturday -- I dare you!    http://tinyurl.com/cygaq4 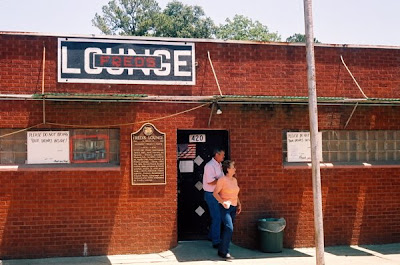 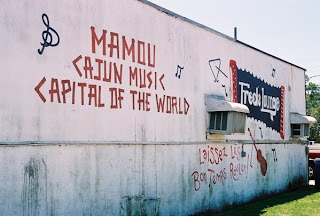 ~~~~~~~~~~
AVERY ISLAND ...
...owned by the McIlhenny family of Tabasco fame, is an island of salt left by an ancient, retreating saltwater ocean.  It is now surrounded by swamps and marshes and is home to salt mine workers, a hot sauce bottling facility, exotic birds and jungle gardens, and a country store where one can buy hot stuff.  Yes, of course I did! 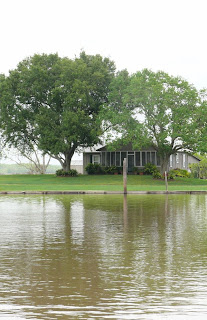 The plant is almost entirely automated.  The only people visible are men making sure the equipment is properly maintained and functioning. 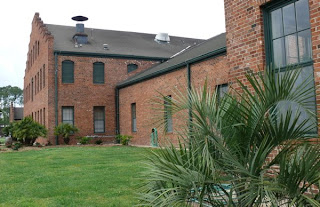 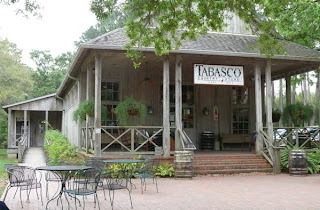 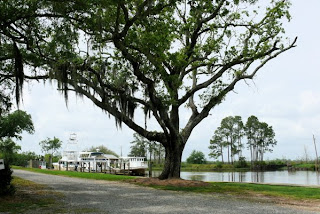 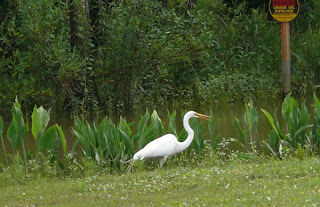 ~~~~~~~~~~
CITY OF RAYNE...
...claims it's the Frog Capital of the World and celebrates that distinction with whimsical murals throughout the town, all painted by different artists.