They span mighty rivers, deep canyons, wide bays, canals, bayous, ravines. They connect, they transport, they cross divides, they support, they dam. Sometimes they even link countries. Bridges join trusses, beams, piers, cables, decks and girders. Some are constructed with wood, others with steel or stone; some support only feet, others a railway.
Sometimes they don't go anywhere; sometimes they collapse. Simple or complex, to me, bridges are remarkable wonders of human creativity, design, and innovative engineering and technology.
~~~~~~~~~~
Cumberland State Park, Crossville, Tennessee
Built in the 1930's by the Civilian Conservation Corps 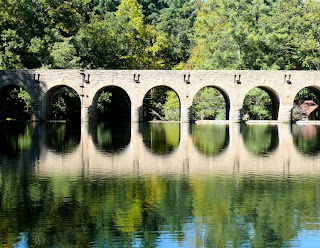 Interestingly, the New River (National River) not only flows northward, but it is the second oldest river in the world, the Nile being the oldest. 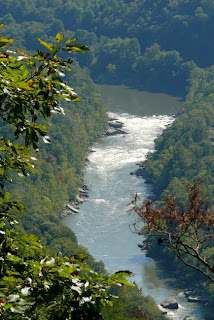 Built in 1970, the New River Gorge Bridge near Fayetteville, West Virginia, is closed for the annual "Bridge Day" celebration so people can walk the span, and daredevils can BASE jump, high line and rappell; bungee jumping was banned in 1993. 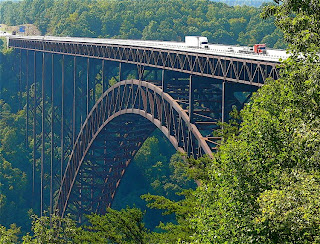 Photo of photo showing the original span at the bottom of the gorge, built in the 1800's 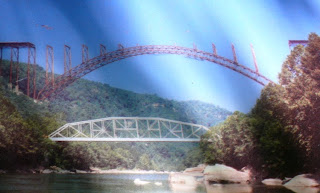 In the early 1800's canals, roads and bridges were constructed in the Alleghany Mountain region to open commerce to the West, including several bridges crossing Dunlap Creek in Covington, Virginia. Many of these were later destroyed by floods and eventually rebuilt. Humpback Covered Bridge is one of them, originally rebuilt in the mid-1800's and restored in 1954 as part of Covington's city park system. 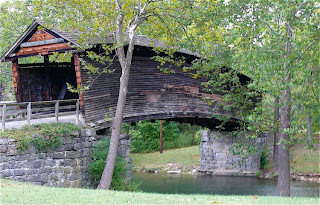 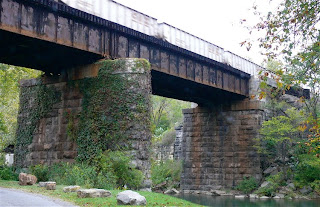 There are scores of these beautiful stone bridges along the Blue Ridge Parkway and Shenandoah National Park's Skyline Road. Built by the Civilian Conservation Corps. as part of the New Deal, they are artistic and engineering marvels constructed by a labor force that hitherto knew nothing about masonry or bridge building. 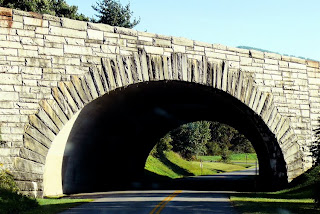 The Arthur Ravenel, Jr. Bridge, a suspension design, opened in 2005 linking Charleston with Mt. Pleasant, South Carolina, spans the Cooper River and, thankfully, is often referred to simply as the Cooper River Bridge. 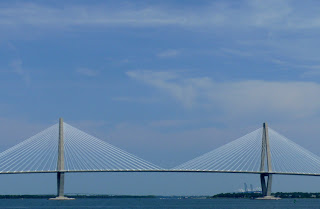 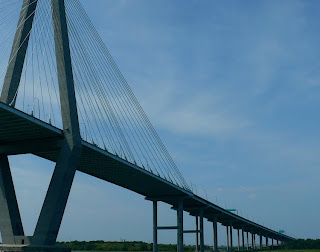 As you can see, I couldn't take enough photographs of this sensational bridge! 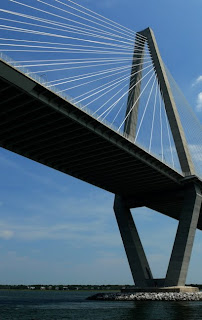 Linn Cove Viaduct is a bridge over land and was nicknamed the "Missing Link." (Fifty-two years after starting construction in 1935, all of the Blue Ridge Parkway had been completed except this 7.5-mile section skirting boulder-strewn Grandfather Mountain in North Carolina.) 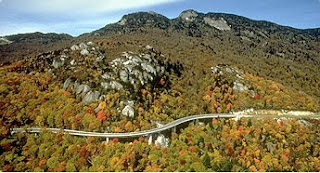 The befuddling question was how to build a road at over 4,000' elevation without damaging one of the world's oldest mountains. The Linn Cove Viaduct is the solution, an engineering triumph completed in 1983 that sweeps in one giant "S" curve around the mountain. It's considered the most complicated concrete bridge ever built. 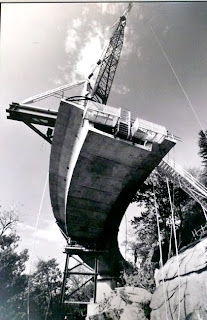 These photos are of the diorama in the Linn Cove Visitor Center. Stats: It's 1,243 feet long, contains 153 segments, and only one of the segments is straight. The viaduct was built from the top down and rests on seven piers, the foundations for which were the only portions constructed at ground level. The concrete roadway sections were built at a facility a few miles from the site then lowered into place by crane, and each new section of the roadway became the only access for completion of the next section. An amazing feat! 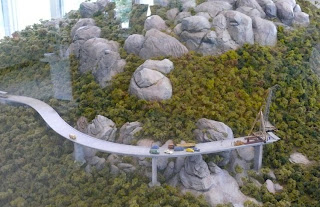 I somehow lost the photos I had taken from the trail beneath the viaduct, but this one is from "topside" through my windshield! Praise the virtues of my camera's stabilizing features! 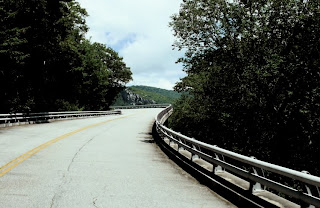 This bridge is near the beginning of the Cherohala Skyway Scenic Byway. The Byway starts in Tellico Plains, Tennessee and ends in Robbinsville, North Carolina. 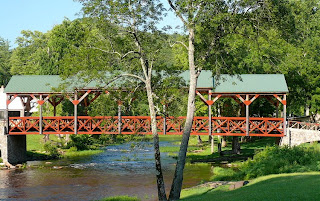 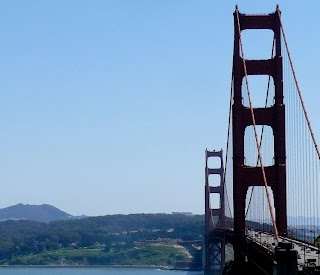