LIVING ON THE EDGE

This is the bridge over the Merced Wild & Scenic River, between Yosemite and Mariposa.  It's one lane as you can see; it's waaaay above the river canyon; its suspenders are low-lying; the ingress on *both* sides are at right angles; there is no red light/green light to curtail oncoming traffic; and there is NO option (or space) for backing up anything but a small passenger vehicle! 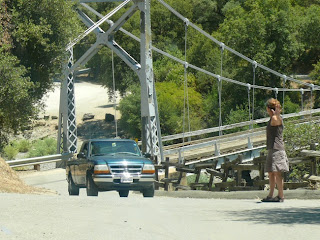 The bridge is crossed by buses with trailers full of rafts and rafters, by gold dredgers in motorhomes larger than mine, and intrepid, half-baked adventurers like me.  I'm assuming that's the reason BLM has not posted ANY vehicle length limitations!

This young woman halted traffic, helped me maneuver around the corner, under the suspenders, over the river and around the corner on the other side.  Where was she when I first crossed this bridge?  Hmmmm, that probably explains the appearance of a new bumper bite on my Lazy Daze! 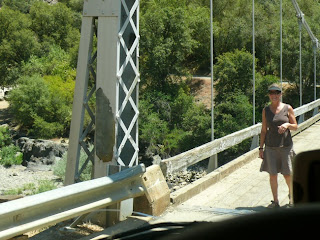 She's paused from signaling so I can take photos. 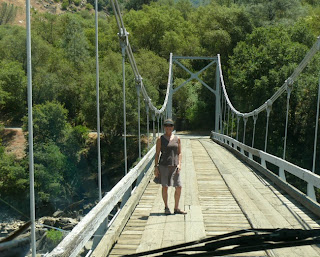 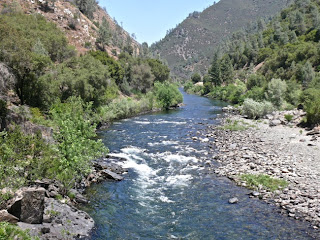 The river, campground and beaches were outstanding.  Overwhelmed by anxiety over the re-crossing, however, I left my idyllic spot after just two days.  A wimp after all!!!
No comments: