What would a visit to Virginia be without a stop at Thomas Jefferson's Monticello? Just a few road blocks though: no interior photographs were allowed, and the formal tour included only the ground floor. While the building and grounds are beautiful, my primary interest in Jefferson has always been in the man (and his beliefs). But if you haven't visited Monticello yet, I hope these photos will take you there. 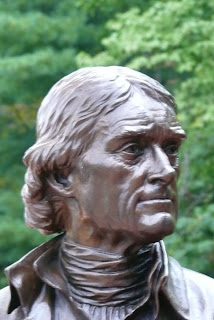 The Visitor Center...Monticello is up the hill; visitors are shuttled to its grounds in a mini van. 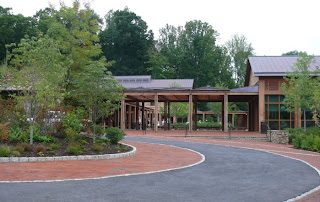 Were it not for Uriah Levy, there might not be a Monticello today. Following his death, Jefferson's slaves and household furnishings were auctioned and sold to the Barclay family and four years later, purchased by Uriah Levy. The Levy family maintained the property for almost 90 years before it was purchased by its present owner, Thomas Jefferson Memorial Foundation, Inc., a private non profit organization. 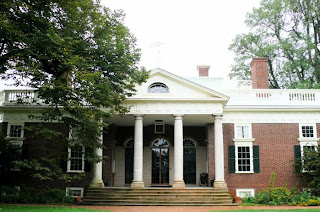 Jefferson was a self-taught architect, who eventually embraced the styles of the Neoclassical buildings he saw while in Paris and the classic Roman architecture of the Italian, Andrea Palladio. He was 25 when he started designing Monticello and moved into the first residence two years later. Jefferson determined virtually every detail in Monticello's design, construction, and its many remodeling and expansion endeavors. 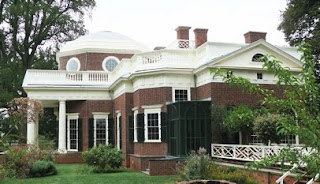 Jefferson selected most of Monticello's furnishings and even designed its draperies. When he returned from his five years in Paris, he brought with him 87 crates of upholstery fabrics, silver, furniture, tableware and scientific instruments. 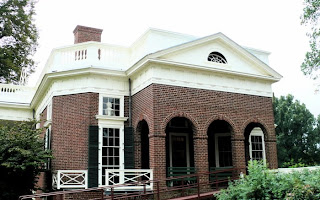 Monticello included a 5,000 acre plantation, elaborate flower and vegetable gardens, vineyards and orchards. In addition to its blacksmith shop, Monticello also had its own joinery and carpenter's shop. 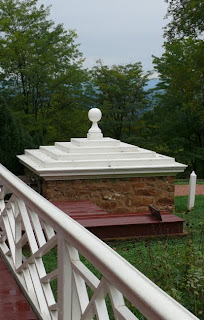 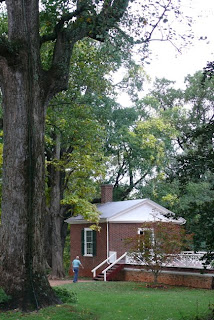 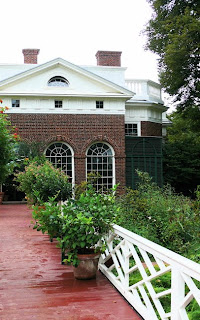 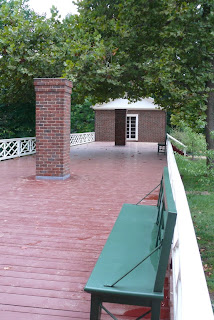 ...and underside basement passages that joined with the "dependencies" wings on the North and South sides of the main house. Dependencies were areas where domestic work was performed. The dependencies and cellars were U-shaped following the lines of the main house and integrated Jefferson's family needs with slaves responsible for household functions. The dependencies also included some slave quarters, separate from Mulberry Row, the primary area where slaves were housed. 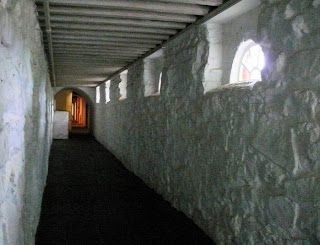 Along these passageways were beer and wine cellars and rooms for bathing, laundry and wood and food storage. 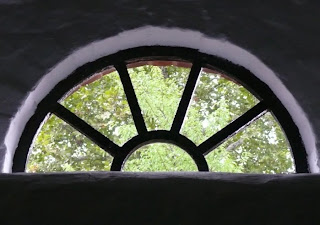 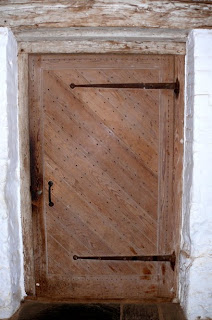 Monticello could boast one of the best equipped kitchens in Virginia, with French copper cookware and a charcoal-fired stew stove where cooks prepared dishes in the French manner. 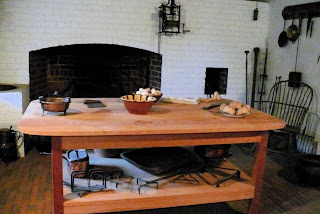 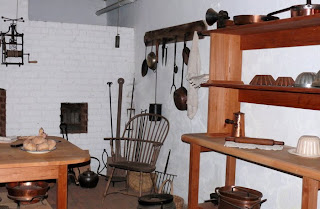 Seen on the back wall of the photo above...a clever pulley for hoisting heavy pots from the fireplace? 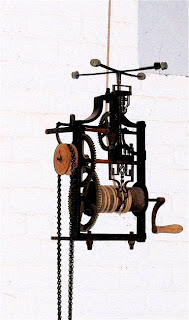 A seven-burner stove? You'd be kept busy, off the streets and out of trouble for sure. I think this must be where the phrase "Slaving over a hot stove" came to be. 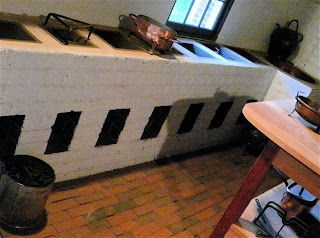 The cook AND her family stayed in this cubicle next to the kitchen. At least it was warm in the Winter months.. 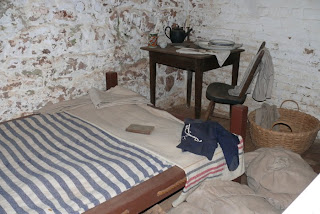 Jefferson had both a wine cellar and a beer cellar. This is the beer cellar where cider was also fermented and bottled. 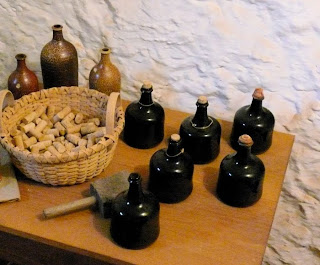 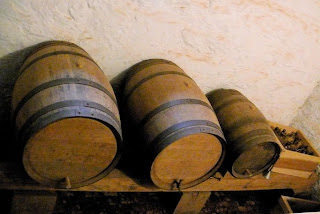 The exterior dependencies housed such necessities as the ice house, stables and carriage house on the North side, and the kitchen, smokehouse and dairy on the South side. 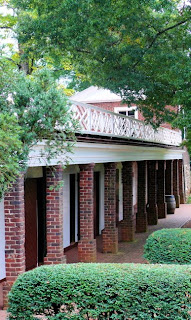 An icehouse, intentionally located on the cooler North side of the house, was built in 1802 for the preservation of dairy and meat products. It is 16 feet across and has a hole in the bottom for melt to escape. It took 62 wagon loads of ice from the nearby Rivanna River to fill it. Usually the ice lasted through the Summer, but one year, it lasted until October! 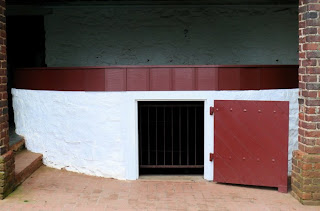 Privies were conveniently located at the junction of the South and North dependency wings and in four other locations, and were eventually moved inside during one of Jefferson's remodeling phases. 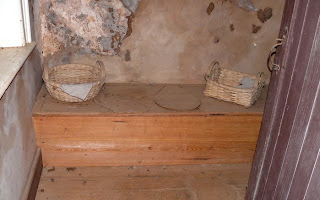 The stables and carriage house were located between the ice house and the North pavilion cellar. 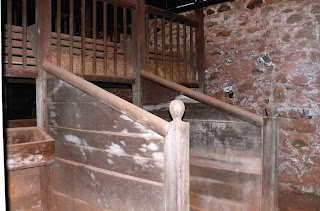 These are hand-forged nail rods from Monticello's own nailery. Neighboring farmers brought work to the blacksmith's shop at Monticello, and Jefferson shared a portion of the profits with the blacksmiths in his nailery. 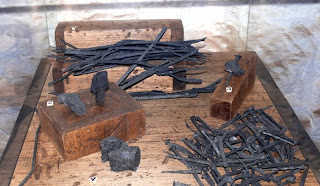 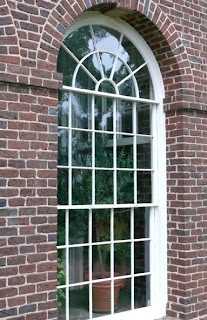 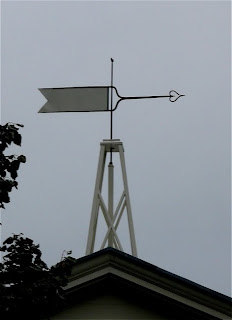 Jefferson's other architectural achievements include Virginia's State Capitol and the University of Virginia. He is buried here, on the grounds of Monticello. 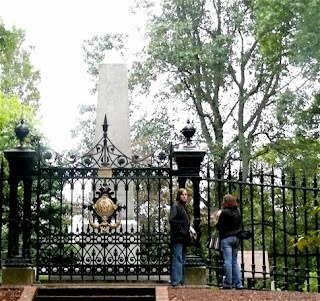 "Nothing is unchangeable but the inherent and inalienable rights of man."
2 comments: